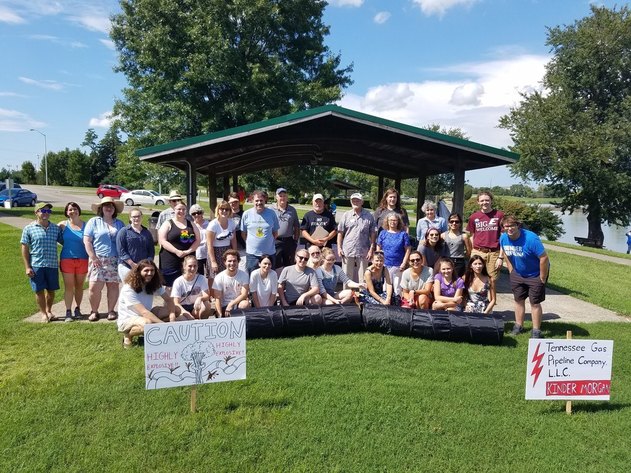 Our 75th Birthday party for the Kinder Morgan Tennessee Gas Pipeline was a blast! We had a great time celebrating the absurdity of repurposing an old, dangerous pipeline to carry an even more explosive material. It was awesome to learn more about the work happening across different organizations and to be in an intergenerational organizing space led by youth. Read our press release here and the coverage in the Richmond Register here! 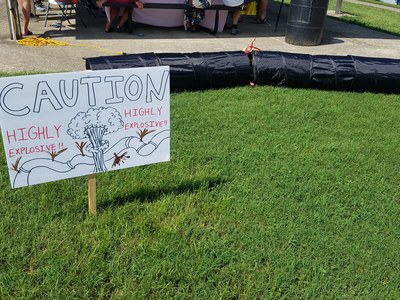 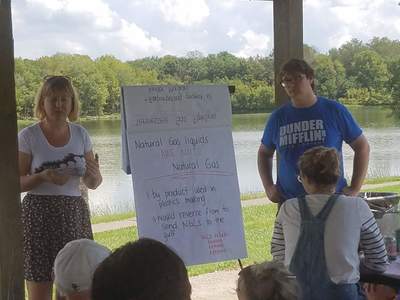 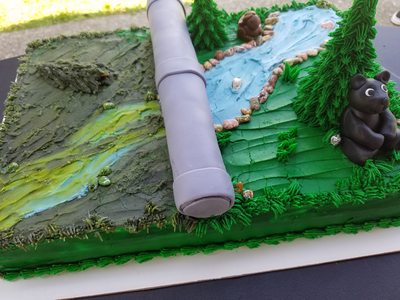 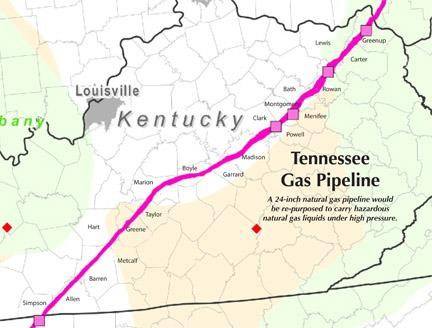 Image Description: A map of the Tennessee Gas Pipeline route through Kentucky. The 18 counties it passes through are labeled. Text on the image reads: "Tennessee Gas Pipeline: A 24-inch natural gas pipeline would be re-purposed to carry hazardous natural gas liquids under high pressure."
The Tennessee Pipeline is an existing pipeline that stretches across Kentucky on its way from New England to Texas. It is 11,900 miles long, was built in 1943, and is owned by a subsidiary of Kinder Morgan. Why does this 75 year old pipeline matter now? This pipeline was built to carry natural gas, and now Kinder Morgan wants to re-purpose it to carry Natural Gas Liquids (NGLs).

NGLs are bad news if you like clean water and air. NGLs are NOT natural gas. They are not used to produce energy. In fact, they are most often the waste products of fracking. If Kinder Morgan gets their way, these NGLs would most likely be sold exported to make plastic.  This pipeline brings no benefit to Kentucky - no energy, no jobs. Instead, Kentuckians would bear the risk of explosions and leaks - leading to injury, death, property destruction, and contamination to air, soil, and groundwater.

All pipelines leak. In fact, this one already has. The Tennessee Pipeline has had 257 "significant failures," which seem to be happening at an increasing rate as the pipeline ages. It cannot be overlooked that this pipeline is 75 years old. In addition to its age, other factors contribute to a frightening likelihood of disaster. First, NGLs must be transported in a highly pressurized state. In order to achieve this, the pipeline must be retrofitted with compressor stations - another point of possible failure. Second, Kentucky has Karst topography, a geological term referring to the way groundwater and limestone interact. This feature means additional pressure points will be placed on the pipeline and further increase the risk of leaks.

When NGL pipelines leak, it's particularly bad. NGLs are heavier than air and tend to stay low to the ground, displacing oxygen. They are usually odorless and colorless and spread across low-lying areas. All together, that means that it's possible to suffocate before realizing that anything is wrong. As if that wasn't enough, the Tennessee Pipeline crosses the state of Kentucky passing through 18 counties past public schools, the Bluegrass Army Depot (where chemical weapons are stored), and Herrington Lake (the drinking water source for Danville).

Kinder Morgan thinks that they can put profit over people to make quick, dirty profit. They think that we aren't paying attention. But we know Kentuckians are not going to let Kinder Morgan threaten our state and our future. Kentuckians say no to pipelines, to fossil fuels, to fracking, to contaminated water, and to extractive industries.

We can stop this pipeline. Here's how.

The Federal Energy Regulatory Agency (FERC) will approve this pipeline if they think it's not considered controversial. It's time to show up and share how controversial we think it is.

Here are actions you can take.
Recent News + Further Reading
Powered by